While it might not be obvious how to assign a iprange as an Allow (or Deny) entry in IIS, it is simple to do.
Simply enter the prefix instead of the netmask in the field for “Mask or Prefix” 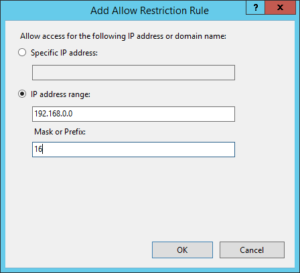 In order to pretend like a file has not been changed since it was checked out from git (for instance to check in changes to a web.config file)

And to undo this:

In order to supress (for instance a section) when a field is empty, mark the section as suppress, open the “Section expert” and click the pen next to “Supress” and then enter when to supress like:

C:\Program Files (x86)\MSBuild\14.0\bin\Microsoft.Common.CurrentVersion.targets(1819,5): warning MSB3245: Could not resolve this reference. Could not locate the assembly "Microsoft.VisualStudio.QualityTools.UnitTestFramework, Version=10.0.0.0, Culture=neutral, PublicKeyToken=b03f5f7f11d50a3a, processorArchitecture=MSIL". Check to make sure the assembly exists on disk. If this reference is required by your code, you may get compilation errors.

Turns out there is a simpler solution than installing Visual Studio on the build-server.
there is a nuget package that resolves this error

using asp:input renders as a submit element, however it is possible to change this behavior so that it gets rendered as a button instead by setting the UseSubmitBehavior attibute to false.

Using a default document located in a subfolder is easy, just fill in the path to the document, and it will be used (The path and document name will not be displayed in the browser).

If you would like to change this see here

In order to not show the session restore dialog go into “about:config” finding the key “toolkit.startup.max_resumed_crashes” and setting this to -1

To look only at files matching a certain name (or part of a name) -name or -iname can be used.

-name pattern Base of file name (the path with the leading directories removed) matches shell pattern pattern. Because the leading directories are removed, the file names considered for a match with -name will never include a slash, so `-name a/b’ will never match anything (you probably need to use -path instead). The metacharacters (`*’, `?’, and `[]’) match a `.’ at the start of the base name (this is a change in findutils-4.2.2; see section STANDARDS CONFORMANCE below). To ignore a directory and the files under it, use -prune; see an example in the description of -path. Braces are not recognised as being special, despite the fact that some shells including Bash imbue braces with a special meaning in shell patterns. The filename matching is performed with the use of the fnmatch(3) library function. Don’t forget to enclose the pattern in quotes in order to protect it from expansion by the shell.

In the console simply run “uname -m”
This will tell you what version you are running:

So for a 32 bit version it will look like: